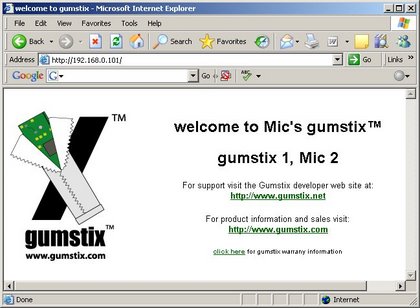 Here we are in Round Three.  The last and latest buildroot revision also built the new version of uboot.  I couldn’t flash it to the gumstix without flashing uboot first.  Early Monday morning I downloaded the latest factory build of uboot from their feed site.  I calculated the crc32 value and size of the file…a couple of times.  Then I transferred it to the gumstix via Kermit in Windows Hyperterm, the same way I did the last time when I bricked the gumstix.  I had uboot calculate the crc32 value and I checked the ${filesize} variable…both a couple of times.  They matched themselves and what I calculated in Ubuntu.

It booted to uboot 1.2.0.  Now I had no filesystem to load in.  I went back to the Ubuntu machine and found the OpenEmbedded filesystem and kernel images that I built back in February, checked their sizes and crc32s, and moved them to my Windows Hyperterm machine.  The filesystem image is loaded first so I started the Kermit transfer; it was a big file to transfer over a serial line.  It took 43 minutes.  After I checked the transfer I flashed it.  Then transferred the kernel image…about 5 minutes.  Type bootm, return.

It booted but seemed to have some issues and audio still didn’t work.  So I downloaded the latest factory binaries for the filesystem and kernel and repeated the steps in the last paragraph.  They loaded and booted fine.

Well sort of.  Lots of things work now that didn’t…the cf card mounts automatically, the /etc/network/interfaces file is easily edited to setup the proper wifi encryption keys, etc., and the ntpdate automatically sets the clock from an internet time server.

Unfortunately, the audio still doesn’t work.  It doesn’t even see the sound card.  The more I read in the wikis and forums, I wonder if anyone has ever had it working.  I posted another request for help on the mailing list but no one has responded…I gave myself another point for flashing uboot without bricking it… gumstix 1, Mic 2

Is the game over?  I have doubts about a quick (if ever) resolution to the audio problem…the gumstix could win with the score gumstix 1, Mic 2.

3 thoughts on “gumstix — Round Three”