The Lehman seismograph is a long period pendulum of the “crooked garden gate” variety. The ability of this type of sensor to measure small vibrations is due to (1) the force transmissibility between the base and the pendular mass and (2) the current generated in a coil of magnet wire attached to the base by the relative motion of a small, strong horseshoe magnet attached to the pendulum. The Lehman seismograph got its name from the July 1979 Scientific American, “The Amateur Scientist” column written by Jearl Walker which described the basic seismograph as built by James D. Lehman of James Madison University but this basic design has been around for a long time. My first desire to build a seismograph came from reading the book “The Scientific American Book of projects for The Amateur Scientist” (1960 printing) by C.L.Stong when I was in junior high school. General information about the Lehman seismograph can be found here.

The signal from the coil is amplified about 1,000 times by a simple amplifier circuit which I found on the internet. Thanks to Dr. Joseph Gerencher of Moravian College for putting his design on the web. ( Gerencher ) This amplifier is based on the 741 op amp which is inexpensive and readily available at your local electronics store…the one with the answers. It was ok to get started but I soon found some shortcomings with those op amps, mainly a long term offset voltage drift with a shorter term oscillation in the offset voltage.

I found another amplifier circuit by A. Loomis which is based on a Maxim Max 420 amplifier. That chip is a lot more expensive but is much superior to the 741 in low frequency applications. I changed a few components to increase the gain and change the filtering slightly.  If the A. Loomis link is dead here is the basic amplifier circuit.

The problem with amateur seismology in the past has been the availability of a recording device. That problem has been largely solved by the availability of a low-cost analog-to-digital converter and essentially free computers. Dataq Instruments ( Dataq ) has a four channel 10 bit ADC for $24.95. While most “serious” seismology demands higher resolution (16 bits is recommended) I have found the Dataq 10 bit device perfectly adequate for getting started. Dataq has higher resolution devices available as needed. Their WinDaq datalogging software that comes with the instrument is excellent for this application and can be configured to record uninterrupted for weeks. The sampling rate is set to 20 samples/second.  Postscript : I now run jAmaSeis on a  Raspberry Pi 2+ running Linux and continue to use the USB ADC (Dataq Model DI-145)

I followed the setup instruction for jAmaseis running under Linux.  Installs very easily on the Raspberry Pi  .  The software has nice facilities for picking arrival times. 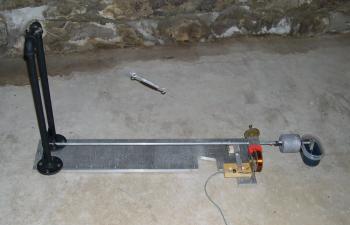 The photograph shows the basic layout of the sensor. An upright support constructed from standard 1/2 inch pipe fittings is bolted to a 1/2 inch thick aluminum plate, also scrap. The moving components pivot on a knife edge ground on a steel rod at the left side and are suspended on a 0.012″ thick nickel guitar string. I trap the ball on the end of the guitar string in a slotted countersunk hole. This allows one to easily remove the pendulum by holding the boom with one hand and flipping the guitar string out of the hole with the other. The upper pivot is offset slightly from vertical relative to the lower pivot to allow the pendulum to swing. The details of the other end are shown in the photograph below. 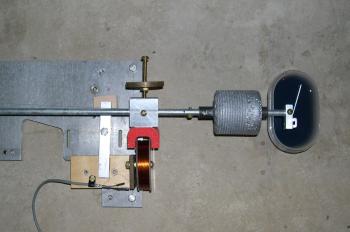 The photograph shows the magnet with brass counterbalance, the pendular mass (about 5 lbs of discarded wheel balancing weights, melted, and cast into a Campbell’s soup can), and the damping vane on the end, all of which swing on the pendulum. The coil (approximately 10,000 turns of #34 magnet wire) and the damping oil bath (SAE 90 gear oil) rest on the base or basement floor.Three leveling screws in the base are used first, to center the pendulum, and second to adjust its period the desired value. My sensor has a period of approximately 16 seconds. Once the period is set the damping is adjusted so that the motion of the pendulum dies out quickly after a disturbance. The guitar string stretches over time, requiring periodic retuning. The last time I adjusted it the leveling screws were near their limits. The next time will required a turn or two on the turnbuckle to shorten the wire before re-adjusting the leveling screws.

The whole device is covered by a box constructed from a sheet of blue foam insulation to protect it from drafts and other disturbances.