Some time ago, I put out a request for help in understanding a shallow bowl-shaped feature in the spectrogram of the sound of aircraft flying overhead. My older son had already suggested that it was a multi-path interference pattern and his suggestion was supported a couple of months later by commenter Alberto Armani who identified the secondary path as a ground reflection.

As it turns out, the ground reflection model is very simple and seems to explain the shallow bowl-shaped feature in the the spectrogram. The model I describe below shows only the frequency dependence of the sound as the aircraft passes overhead and not the amplitude.

A simple ground reflection model can be described by the sound source, eg. an aircraft, flying along a straight path at some altitude above perfectly reflecting plane. A receiver, eg. a microphone, receives the acoustic signal from some height above the reflecting plane. The basic geometry is shown in Figure 1. 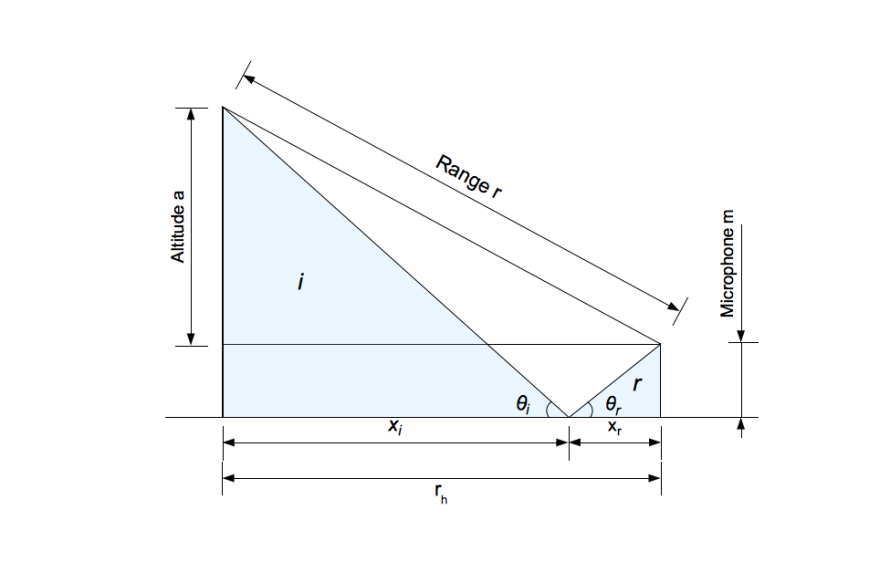 Three dimensions are known from the Doppler measurement, 1) the range, r, 2) the altitude, a, and 3) the height of the microphone, m. The range at any time can be calculated knowing the speed, the altitude, and the time of closest approach. The model assumes a flight path directly overhead. Note that the altitude is measured from the microphone location, not the ground level.

The indirect, ground reflected path from the aircraft to the microphone is determined by the law of reflection requiring that the angle of incidence is equal to angle of reflectance. The equality of these two angles gives rise to a pair of similar right triangles, i and r, having altitudes of a+m and m, respectively. The sum of their bases is equal to the horizontal component, rh, of the range r.

The model development begins by calculating the horizontal component of the range, rh using the Pythagorean theorem:

then we note that

and that by similar triangles

Now we can determine the incident portion of the indirect path, the hypotenuse of triangle i

Now we can determine the reflected portion of the indirect path, the hypotenuse of triangle r, by invoking similar triangles again

Finally, we substitute the original expression for

We now have the lengths of both the ground reflected and direct paths. Constructive interference will occur when the sound arrives in phase at the microphone via the two different paths. Since the sound is in phase along both paths after it has traveled a distance of r, the range, it will be in phase at the microphone only for those frequencies for which an integral number of wavelengths will fit into the difference in the two path lengths,

Since it can be shown that

is the propagation speed, the speed of sound

is the wavelength of the sound

is the frequency of the sound

the frequencies at which constructive interference occurs will be

Application of the Interference Model to the Chinook Helicopter Spectrogram

My original recording of the Chinook Helicopter was made over relatively flat ground and in a relatively open field without nearby buildings, trees, etc. although I was present to reflect and obstruct sound near the microphone.  The original spectrogram is shown here again

As mentioned previously, the Doppler shift fit results allow us to calculate the range at any time from the velocity, the altitude, and the time of closest approach.  Then the ground reflection path can be calculated knowing the range.  Then the constructive interference frequencies can be calculated from the path difference.  The results can be plotted as a family of interference curves as shown here

The actual data is difficult to read from the spectrogram with any precision but it appears to be at least in the ballpark of the model prediction.

Mr. Armani had suggested placing the microphone on the ground as a way to eliminate these ground reflections.  I made a recording of the Air Tractor agricultural aircraft in this way with my findings reported here.

This analysis is for a stationary source at the different distances.  For a moving source, the sound would obviously be Doppler shifted so that correction should also be applied.  If you look closely at the actual spectrogram you will notice that the bowl shaped feature is not symmetrical…showing lower frequencies on the right hand side than on the left.