The first project in this series uses the recording and waveform display capabilities of Raven Lite to estimate the speed of sound.

Discussion of the theoretical model

We can estimate the speed of sound in air by measuring the time it takes for a sound impulse to travel a known distance.  Then

This could be done using two microphones spaced the known distance apart but we will use a single microphone to capture the initial impulse of a breaking balloon and then will capture the return impulse after it reflects off of a large wall.

This measurement is made outdoors in a yard or parking lot next to a single large building.  The idea is to find a space that has one large vertical reflecting surface and no others.  Measure off a distance perpendicular to the wall of exactly 100 feet and place the microphone at that point.

Inflate a rubber balloon and start Raven Lite recording to memory.   Quickly prick the balloon with a needle to pop it.  Stop the recording and save it to disk.  Make a couple of repeat recordings. 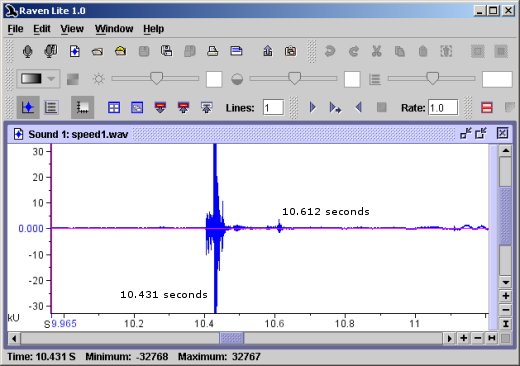 Use the mouse to position the pointer over each impulse to read the time at the lower left corner of the screen.

I got 10.431 seconds on the direct impulse and 10.612 seconds on the tiny reflected impulse for a difference of 0.181 seconds.  This is the time required to go 200 feet.  Calculating the speed from those values gives an estimate of 1104.97 ft/second.

Our estimate is a little bit off, but being within 1% is not bad.  Two obvious things contribute.  First, a thousandth of a second makes a significant difference in the speed estimate and it is difficult to measure the two times precisely due to the resolution of Raven Lite and the breadth of the signal on the display.  Repeated measurements could be done to average out this error.  Second, my microphone was at ground level since I just have a little desktop stand for it but I was standing when I broke the balloon.  The time it took for the direct sound to reach the microphone is not insignificant and should be accounted for.

4 thoughts on “1. Estimate the speed of sound”