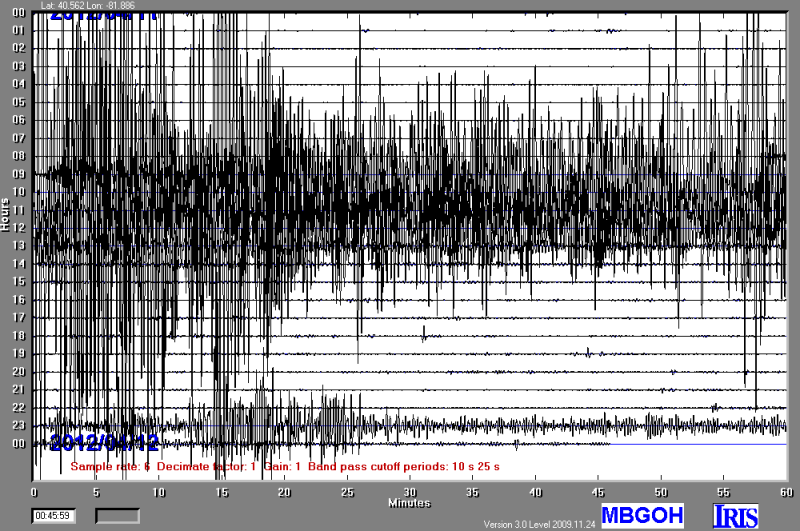 Today two earthquakes of magnitude greater than 8.0 (8.6 and 8.2) took place in the Indian Ocean off the coast of Sumatra in a span of just over two hours.  One might expect only one or two earthquakes of this size worldwide in a year but here were two that were close together in both time and space.   The helicorder display on my seismograph was unreadable.  I normally keep it set to a gain of 4 but dropped it back to 1 this evening to view  a Magnitude 6.5 earthquake in the Michoacan, Mexico that had been originally reported as Magnitude 7.0.  Embedded in the signal in the lower part of the display is a Magnitude 5.9 earthquake off the coast of Oregon.  The image  above shows the helicorder display as recorded in northeastern Ohio.

As I looked at the tectonic setting in Sumatra this morning I noticed that the convergence rate of the subducting plate in the Indian Ocean where today’s large earthquakes occurred was 52 mm/yr.  That compares to 77 mm/yr off the coast of Peru where we spent a week last month and which experienced a magnitude 8.0 earthquake and an associated tsunami in 2007.  The devastation there was still very much in evidence five years later.