I have been curious about the source of microseisms on my seismograph since I completed it in 2004. I initially dismissed the explanation that they originated from intense ocean storms but after watching those storms online and comparing to my seismograph traces there is convincing qualitative evidence for that explanation. This past winter I decided to try to collect some data for a closer look. I began collecting data on January 08, 2020 at 12:00 UTC. I have a continuous record of the significant wave height in the Atlantic Basin and a fairly complete record of the microseism record as described below through the end of April and will continue to collect data going forward. This post will describe what I am doing and will introduce the results obtained in January through a short video. I am working on merging datasets and starting a statistical evaluation of the data so I hope some interesting things will come out of it.

An article in Geophysical Research Letters titled ‘Stormquakes’ pointed me to the portal to NOAA’s WaveWatch III gridded ocean surfce model results. Information on the NOAA website showed how to access and use data from the model. I modified the example Python script to access and map the significant wave height data in the North Atlantic Ocean Basin. This runs every six hours as cron job, automatically acquiring, mapping, and filing this information.

Those spikes are of no interest in the present study.  What is really of interest is the envelope of the underside of this graph described by the minimum values.  Because I only have the ocean surface information at six hour intervals I evaluate the minimum value of the trace standard deviation on the eleven 30 minute trace segments centered on each of the hours 00, 06, 12, and 18 UTC.  These values are plotted as the red line in the graph.

A very near minimum and the maximum value of the red line occur only three days apart, on January 15 and January 18, respectively.  Here are the 24 hour helicorder charts for the two days. 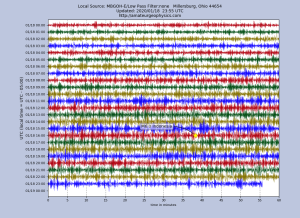 And the Significant Wave Height during the same days: 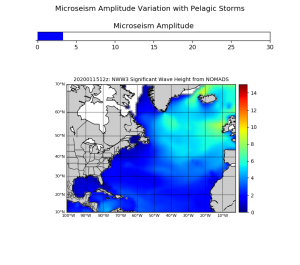 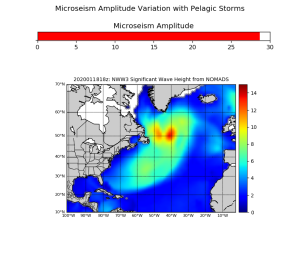 The Geophysics Research Letters paper referenced earlier specifically associate The Grand Banks off the coast of Newfoundland with stormquakes.  This particular example seems to support that association.  I hope that my long term study will give a little more structure to what we see here.  In the meantime here is a short video showing the progression of January’s winter storms across the North Atlantic.